Home > Open Air Concert and Screening of The Wages of Fear: Restored (...)

Open Air Concert and Screening of The Wages of Fear: Restored Copy 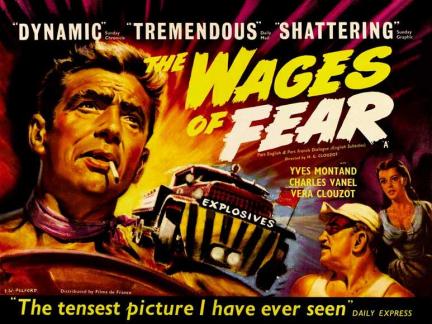 
The Wages of Fear (Le Salaire de la Peur, 147 min) is commonly viewed as one of the greatest thrillers ever committed to celluloid - a white-knuckle ride from France’s legendary master of suspense, Henri-Georges Clouzot.

Starring Yves Montand and Charles Vanel, this classic tells the story of four desperate men who sign on for a suicide mission to drive trucks loaded with nitroglycerin over a treacherous mountain route. As they ferry their explosive cargo to a faraway oil fire, each bump and jolt testes their courage, their friendship and their nerves.

Winner of Golden Bear at the Berlin Film Festival and the Palme d’Or at the Cannes Film Festival in1953, black & white with English subtitles.