The Consulate General of France in Boston and The Art Institute of Boston at Lesley University present a stirring photo exhibit on the Arab Spring by French photojournalist Rémi Ochlik, who was killed in the February 2012 bombardment of Homs during the Syrian uprising along with American war journalist Marie Colvin. 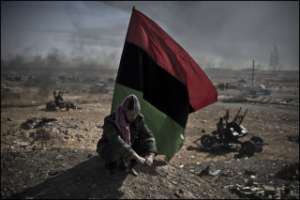 The exhibit will run through February 22, 2013 at The Art Institute of Boston (AIB) Main Gallery, 700 Beacon Street, Boston. Free and open to the public.

Ochlik’s photos of the Arab Spring received the “Grand Prix Jean-Louis Caldeon” award, and he won first prize in the 2012 “World Press Photo” contest for his photo of a Libyan rebel fighter. 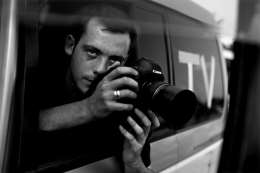 Rémi Ochlik, until his death at age 28, covered pivotal events around the world, including riots in Haiti in 2004 surrounding the fall of President Jean-Bertrand Aristide, war in the Democratic Republic of Congo in 2008, the cholera epidemic and presidential elections in Haiti in 2010, and the Tunisian and Egyptian revolutions and the uprising and war in Libya in 2011.

Ochlik’s photographs have been published in publications such as Le Monde Magazine, Paris Match, Time and The Wall Street Journal, among others.

Ochlik was born in eastern France in 1983. After graduating from high school, he went to Paris to study photography. He also started working for Wostok, a photography agency. In 2005 he founded his own agency called IP3 PRESS, with the goal of covering news in Paris and conflicts around the world.

The New York Times article about this death can be read HERE. Learn more about Ochlik and view his photos HERE.

The exhibit and related events are co-sponsored by The Consulate General of France in Boston and The Art Institute of Boston at Lesley University. These events are sponsored in part by Reporters Without Borders, Best of Boston/Boston Coach and Marie Landel & Associates, Natixis, EMD Millipore Corporation and Veolia Energy North America.

These events are organized with the assistance of Amnesty International USA.