Pictures of the Bastille Day event!

On Monday, July 14th, the Consul General of France in Boston, Mr. Fabien Fieschi, bestowed the Légion d’Honneur (Legion of Honor), France’s highest civil and military distinction, upon two American Veterans, Mr. Frank Pagliuca and Mr Norman Grossman, who participated in the D-Day invasion of the Normandy beaches and other subsequent battles that changed the course of the world’s greatest conflict and restored freedom and democracy to the European continent. This took place as part of the official reception at the Massachusetts State House that the French Consulate organized to celebrate Bastille Day. Bastille Day is a day that marked the beginning of the French Revolution and the men who crafted its history. This year was even more special as it was also the 100th year anniversary of WWI. 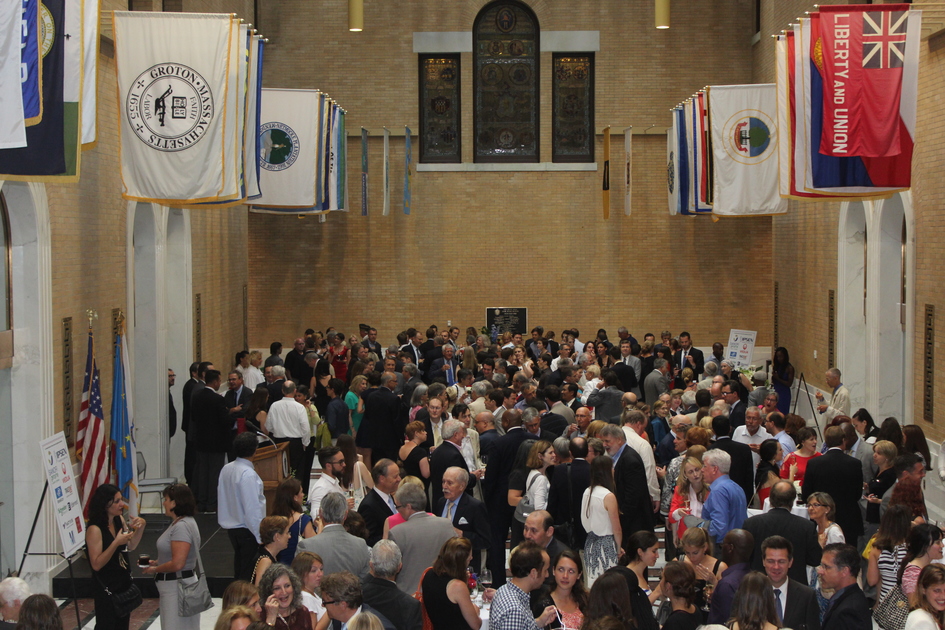 Over 400 guests, French people and American Francophiles, attended the private ceremony to celebrate La Fête Nationale; among them were also representatives of other foreign consulates, and of the companies who sponsored the event: IPSEN, Veolia, Trace One, Sanofi Genzyme, Essilor, Schneider Electric, Natixis, EMD Millipore, Edenred and Marie Landel & Associates.

Watch the video of the Legion of honor ceremony: https://www.youtube.com/watch?v=cVEEUbbh5rw

About the veterans: Born in Boston (MA), Mr. Norman Grossman enlisted in the US Army on December 14, 1942. He arrived in Europe on D-Day during the Normandy campaign with 1,200 other men and various landing crafts. Mr. Grossman and his fellow soldiers disembarked under heavy enemy fire and moved inland after a two-hour journey across the beaches. After weeks of continuous combat, Mr. Grossman took part in the liberation of Saint-Lô. During the assault, he was injured while fighting bravely on the front lines.

Born in Brockton (MA), Mr. Frank Pagliuca was inducted into the US Army on December 6, 1943 and participated in the campaigns of the Ardennes, the Rhineland and Central Europe. As a member of the 75th Infantry Division, Mr. Pagliuca worked a field lineman, ensuring telephone communications between the field artillery and the Infantry Regiment. He conducted this important work while under heavy enemy fire and in inclement weather, especially during the campaign of the Ardennes, which took place in heavy snow. Mr. Pagliuca and his division continued their service to the Liberation of France in cooperation with the French forces under the command of General de Lattre de Tassigny.

Both put their life at risk to liberate France from oppression. For their bravery and service during World War II, each has received a number of awards from the American army.