Remembers events of September 11 as a "Terrible Shock". 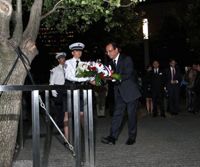 President François Hollande laid a wreath on Wednesday at "Ground Zero," the former location of the Twin Towers in New York City. Eleven years after the terrorist attacks of September 11, 2001, President Hollande described his feeling of "terrible shock" upon hearing the news.

The President visited Ground Zero just a few hours after delivering a speech at the United Nations, as part of the international organization’s opening of the General Assembly.

Mr. Hollande was joined by a delegation of top-level French officials, including Laurent Fabius, Minister of Foreign Affairs, Yasmina Benguigui, Minister for the Francophonie, and Pascal Canfin, Minister for Development.