Home > France in the US > Veterans and victims of war > Press Articles about American Veterans Awarded the French Legion of (...) 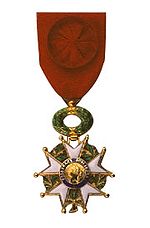 The French Legion of Honor (L’ordre national de la Légion d’honneur) is the highest decoration offered by the French governement and was started by France’s first consul, Napoleon Bonaparte in 1802. Despite being generally awarded only to french nationals, acceptance to the Legion of Honor can be bestowed upon foreign nationals who have served France or uphelp it’s values and principles.

The Consul General of France in Boston, Mr. Fabien Faschi, has personally awarded the honor to several New England area American veterans who served their country and defended France in World War II.

The news articles published for each of the veterans who have thus far received the honor follow :