Home > Research and innovation : the French Embassy wins a national (...)

Research and innovation : the French Embassy wins a national prize!

The New England Technology Venture Accelerator (NETVA), a new initiative of the French Embassy in United States has been awarded “Best Research and Innovation program” at the 7th edition of the Economic Initiatives Competition, hold in Paris on May 28th, 2010. A jury of 70 economic journalists acknowledged NETVA, designed and managed by the Office for Science and Technology of the French Consulate in Boston, for its support to the development in the US of innovative French start-ups in the US.

Hold since 2004, The Economic Initiatives Competition, or Initiatives de l’économie in French, rewards the best projects fostering competitiveness and partnership. Its objective is to underline the dynamics favorable to economic development, employment and innovation. The Prize was given to Antoine Mynard, the Scientific Attaché at the Consulate General of France in Boston by Bernard Dizambourg, Special Advisor to Valérie Pécresse (French Minister for Higher Education and Research) at the French Economic, Social, and Environmental Council in Paris.

Designed in Boston with a strong support of the Boston area entrepreneurship community, NETVA aims at facilitating and accelerating the expansion of high potential French start-ups in the U.S. It is addressing the need to internationalize budding French high-tech businesses and provides them with a personalized coaching, mentoring and technology partnership program. NETVA also provides a customized support for younger French innovative businesses as they attempt to grow and blossom within the dynamic and competitive environment of the United States.

Selected nation-wide by a Franco-American committee, the six laureates of the 2010 NETVA edition will be granted an intensive accelerator week in Boston in September where they will receive a customized coaching from local U.S. entrepreneurs and experts of early stage international development at Boston University. Moreover, they will be matched with a personal U.S. mentor as well as with some prominent technology and entrepreneurship leaders of the Boston area. A team of American senior MBA candidates will also work for 3 months with each company and provide their expertise to adjust their business plans to the U.S. market. This accelerator week will be preceded in June by a two-day long preparation workshop in France.

NETVA partners with the Institute for Technology Entrepreneurship & Commercialization at Boston University (ITEC/BU) and the French national network of business incubators and science parks (RETIS). The initiative is also supported by the Massachusetts Office of International Trade (MOITI) & Investment and the French-American Chamber of Commerce (FACCNE) and the French Foreign Trade Counselors (CCEF). Boston-based GoToMarket Consulting is NETVA’s first corporate sponsor and further sponsorships are being sought to expand the program. Instrumental in building transatlantic ventures, NETVA provides to its partners connections with high-potential startups and exposure to the French and American entrepreneurship ecosystems. 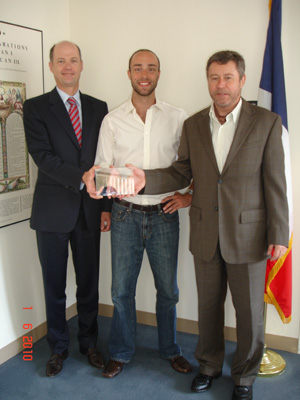 About the French Consulate’s Office for Science and Technology The Office for Science and Technology’s mission is to foster collaboration between French and American researchers, innovation professional and technology entrepreneurs. To accomplish this mission, the Office run and fund various collaborative programs and helps French and American companies, universities and research organizations to develop technology partnerships. Strongly involved in the Boston entrepreneurship ecosystem, the Office also promotes the French excellence in science and innovation and animates the Francophone scientific community of the area.
www.consulfranceboston.wordpress.com

About ITEC - Boston University The Institute for Technology Entrepreneurship and Commercialization (ITEC) provides a full range of education, training, mentoring, and networking programs and opportunities that support the new entrepreneur. Centered at the Boston University School of Management, it serves as an educational resource to the entire university campus and to the local, national, and international communities.
www.bu.edu/itec

About RETIS RETIS is the French national innovation and entrepreneurship network which regroups more than 100 business incubators and science parks in France. RETIS also has strong relationship with the US-Based National Business Incubation Association (NBIA).
www.retis-innovation.fr