Ruth Simmons, the 18th president of Brown University (2001-12) was awarded the French Legion of Honor in a ceremony on May 16, 2013, at the John Carter Brown Library. The award is the highest decoration given by the French government, honoring individuals who made great achievements and promoted France’s values around the world. 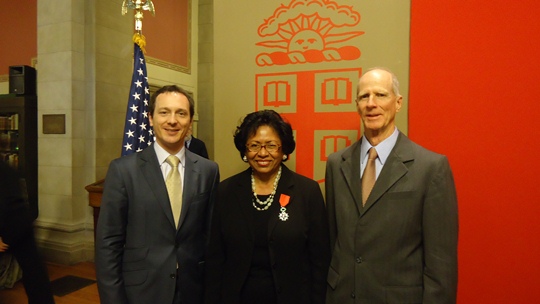 “I am honored to accept this award from the French Republic,” Ruth Simmons said. “My interest in languages and cultures began very early in my education, inspiring what would become a life-long interest in French language and literature. Today, more than ever, I believe that students must be educated broadly, as global citizens, to navigate our increasingly complex world. To be recognized for my commitment to this value is truly an honor.”

“She has continuously fought against inequality and discrimination,” Consul General of France Fabien Fieschi said, “promoting and relentlessly teaching human rights and values that France has always honored and supported. The nomination of Ms. Simmons as Chevalier dans l?ordre de la Légion d?Honneur is a small token of our admiration and recognition for a life dedicated to the power of intelligence and education to transform lives, for a career dedicated to being a visionary leader in academia.” 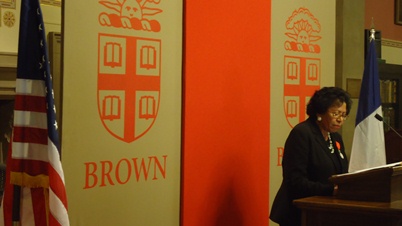 Rut Simmons has continuously fought against inequality and discrimination, promoting and relentlessly teaching human rights and values that France has always honored and supported. Her commitment to equality, liberty, and fraternity — the French Republic’s motto — has led her to become the first woman president of Brown University and the first African American heading a major Ivy League institution. During her tenure at Brown, she also made internationalization a strategic priority to better prepare Brown’s students for the challenge and opportunities of an increasingly interconnected world.

The French Legion of Honor

The French Legion of Honor (L’ordre national de la Légion d’honneur) is the highest decoration offered by the French government and was started by France’s first consul, Napoleon Bonaparte, in 1802, who replaced the old orders of French Chivalry with a system of recognition for distinguished service based on individual merit rather than on nobility of birth.

Since then, the Legion of Honor has recognized a select number of great women and men that have contributed to the advancement of the arts and to the enrichment of the French cultural inheritance and its diversity, not only in France but throughout the world. Recipients are named by decree signed by the President of the Republic.