In this time of commencement, we are pleased to warmly congratulate Saiful Saleem, recent graduate of Boston University (B.A., French major, Political Science minor) from Singapore who is the proud winner of the First Excellence Award of the Consulate General of France in Boston for the most remarkable student in French culture and language. This prize was awarded to him at the commencement ceremony for the B.U. Department of Romance Studies on May 16th. 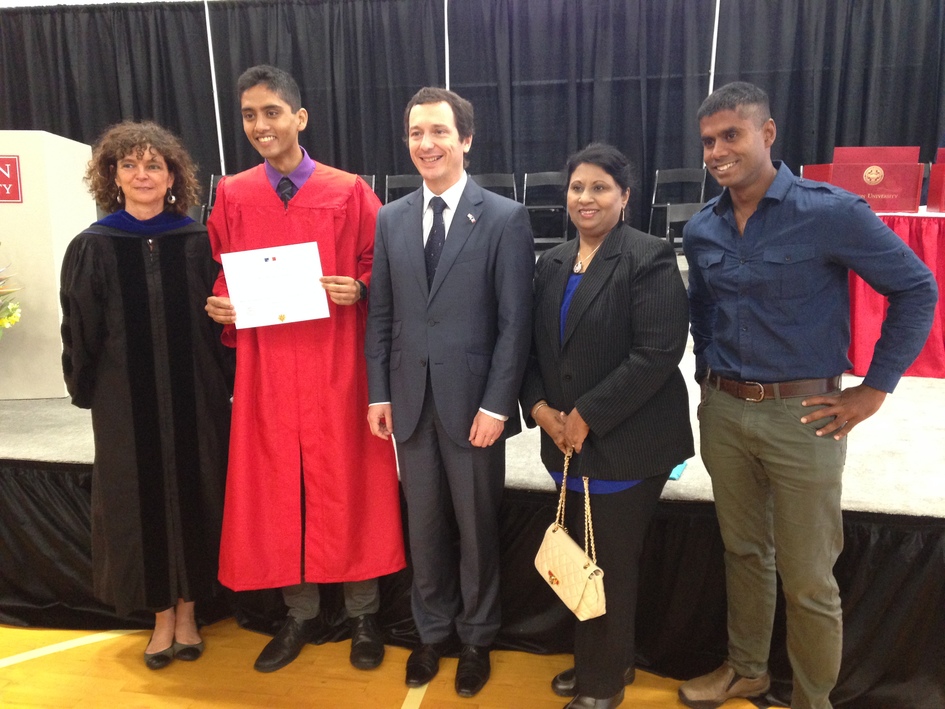 The prize was created this year to recognize a student of French in a New England university, member of a French/Francophone club or French house (maison française), who especially stood out thanks to his progress in French and his active promotion of French language- and culture-related activities on his college campus. The competition began this year as a test run at ten universities in and around Boston, and will be open to all colleges in the district of the French Consulate of Boston starting next year.


Saiful began studying French just three years ago, but he has already mastered the language perfectly. French culture does not hold any secrets for him either, or very few! As President of l’Association francophone de Boston University (AFBU) since September 2013, he helped organize with the help of other AFBU members many on-campus events throughout the year: for example, round table discussions on the French presence in Mali, on Franco-Algerian relations and on the municipal elections, the 100th birthday of Albert Camus, and the symposium on homosexuality and Islam.

Bravo to this remarkable student for his energy, exceptional motivation and great intellectual curiosity!

Bravo also to Avery Bennett, freshman at Harvard University, Samantha Swartzendruber, senior at Suffolk University as well as Hannah Gersten, sophomore at Tufts University, who were all nominated by their professors to represent their universities in this competition and who all received certificates of excellence.

Read our interview with Saiful:

1) Tell us about where you started and how you got here.

Almost four years ago, I didn’t speak French. How, then, do I speak it today? It started when I was fifteen. One day, I came upon a book by Voltaire- Candide- and I loved it. Obviously, I read it in English and didn’t even know that Voltaire was French. I thought he was an English speaker, like me, like everyone. Later, I discovered that he wrote in French. I told myself that I absolutely had to learn this language. I then needed five years before I could begin to realize this goal. On the last day of my military service, one of the officers asked me what I was going to do. I told him I would learn a new language, but that I was still deciding between French and Spanish. He encouraged me to learn Spanish because, according to him, it’s a useful and practical language. I immediately decided to do the opposite.

2) Why this interest in French and in France?

3) What does this prize mean to you?

It’s a sign of support and of recognition. I am delighted that my contributions to the French literary scene in Boston have been recognized. Furthermore, the fact that a prize awarded to French students of the region exists testifies to the engagement of the Consulate in our universities, which can only be a good thing.

I’m about to start a doctorate in French literature at the Graduate Center, City University of New York. I’m convinced that the academic sphere is the ideal place to conduct research, write, learn and teach, to contribute to the change of consciousness we need in order to achieve the projects of the Enlightenment.