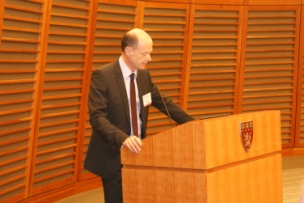 On December 6 2011, about a hundred researchers, entrepreneurs and students attended the seminar French American Innovation Day (FAID), in the presence of the Consul General of France in Boston, Mr. Christophe Guilhou. This event took place successfully in the Harvard Medical School in Boston.

Title "Science and Innovation : The Challenges of Translational Breakthroughs", the FAID brought together renowned scientists in fields of biomedical and engineering sciences as well as French and American entrepreneurs. This seminar combined science and technology in order to bring together ideas of innovation.

This event, set up in 2002, was organized by the Office of Science and Technology of the French Embassy to the USA (section of Boston), in collaboration with French innovation Campus GIANT (Grenoble) and in partnership with Pioneer Valley Life Sciences Institute, PVLSI (MA, United States).

This seminar allowed scientists to tackle themes of innovation. The first goal was to develop the prominence of French firms in the United-States, and particularly in Boston, as well as to get in touch with similar American firms. Secondly, this event aimed to highlight cooperation between France and the United States.

A competition had been organized calling for projects from U.S. based PhD. Both winners of this «poster competition», Mr. Camille Delebecque, PhD (student at Harvard) and Dr. Thomas Crouzier, (postdoctorant in MIT) were awarded travel to Grenoble, France, which will allow them to visit GIANT and develop future collaboration. 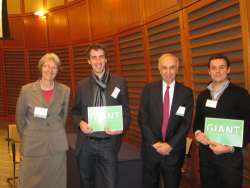 During the last few years, there have been many medical discoveries that have remained idle. Thanks to translationel research and the multidisciplinary training of a new generation of engineers, doctors and entrepreneurs, GIANT and PVLSI hope to improve their innovation activities and connect with partners from the two countries.

The FAID 2011 dealt with new research tools, the training of new skills, and information on innovation in translationel research. This seminar also tackled affair models of health firms.

This seminar has provided an opportunity to continue future relations and collaborations between the participants of GIANT and the American scientists and entrepreneurs. 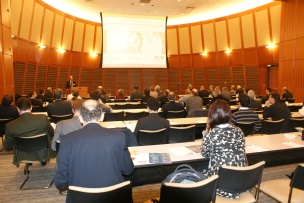