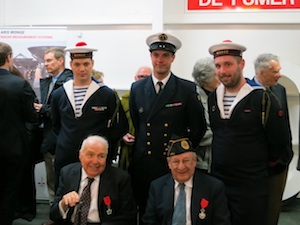 Seated, from left to right: Mr. Robert Aubin and Mr. Harvey Segal, Chevaliers of the Legion of Honor, surrounded by French naval officers.

On Monday, April 8, 2013, Mr. Robert Aubin and Mr. Harvey Segal were both given the highest decoration offered by the French government, the Legion of Honor. This special ceremony was held on the French naval ship, “Le Monge”, which is moored in Boston’s harbor from Monday, April 8 to Saturday, April 13, 2013.

The ceremony, featuring remarks by Consul General Fabien Fieschi, was attended by over 80 French naval officers, including the ship’s captain, CV Jacques Rivière, members of the US Coast Guard and Boston Fire Department, as well as members of the French-American community in Boston.

See below for the remarks made by Fabien Fieschi, Consul General of France in Boston:

Speech given by Mr. Fabien Fieschi, Consul General of France, for the Decoration of Mr. Robert Aubin and Mr. Harvey Segal.

It is an honor to have the opportunity today to speak about two of New England’s distinguished veterans, Mr. Harvey Segal and Mr. Robert Aubin, for their outstanding contributions to the liberation of my country, France. 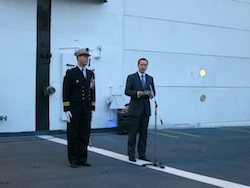 The service of these two men reminds us of the decisive role played by the Americans in World War II. It is thanks to their commitment, along with the Forces Françaises Libres and other Allies’ relentless efforts, that Europeans managed to escape a brutal rule and are able today to enjoy democracy and freedom. France recognizes the tremendous sacrifice and courage that went into its liberation from Nazi occupation. It is our duty to honor those such as Mr. Aubin and Mr. Segal who participated in freeing France and Europe.

Allow me first to remind us of a few facts about this prestigious award, the Legion of Honor. Established in 1802 by Emperor Napoleon Bonaparte, it is exclusively awarded in cases of exemplary military and civilian services. It is the oldest and highest honor in France. It was awarded to Mr. Segal and Mr. Aubin by decree of the President of the French Republic, Mr. François Hollande.

I would now like to recall the specific roles that both of you played in the Liberation of France and in the Allies’ victory.

Mr. Aubin, you enlisted in the US Army on December 29, 1942. As a member of Company F of the 115th Infantry Regiment of the 29th Division, you arrived in France on June 13, 1944 and took part in the battles of Saint-Lô and of the Vire. Despite heavy losses during these battles, your regiment continued across France to Brest, where you protected a strategically important bridge. During the combat in Brest, the commandants of your section were lost. In the midst of this leaderless battle, you took charge. You were later decorated with the Silver Star for this brave act.

For your sacrifice and courage during World War II, you were also awarded the Purple Heart, the European-African-Middle Eastern Campaign Medal with four stars, the Good Conduct Medal, the Combat Infantryman Badge, the Bronze Star with one oak leaf cluster and the World War II Victory Medal. 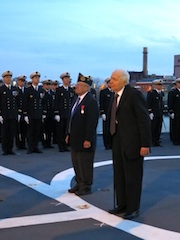 From left to right: Mr. Harvey Segal and Mr. Robert Aubin, Chevaliers of the Legion of Honor

Mr. Segal, you joined the US Army on July 16, 1943. As a member of the 37th Field Artillery Battalion, you arrived in France on June 8, 1944. Your battalion participated in several of the key campaigns in the Liberation of France, such as the battles of Normandy, of the Ardennes and of Brest. As a radio operator, your job was to facilitate communication between the battalion and the soldiers on the front line; you often had to complete your work in dangerous situations while under enemy fire.

For your bravery during World War II, you were awarded the European-African-Middle Eastern Campaign Medal, the Good Conduct Medal and the World War II Victory Medal.

Mr. Segal, Mr. Aubin, we are grateful to both of you for your heroic actions. In spite of constant exposure to danger, you and your fellow soldiers showed extraordinary courage and bravery throughout your service in France. You have both demonstrated a spirit of honorable sacrifice in keeping with the proud tradition of military service.

Your contributions are an exemplary model for all future generations, particularly as both French and American troops are still engaged in the fight for freedom in other parts of the world, such as today in Afghanistan. The history of Europe since World War II teaches us that these sacrifices are not in vain: France and Germany, who had been repeatedly at war for more than a century, have become among the closest partners in the world, and the possibility of war in Western Europe has become unthinkable.

I would like to take a moment to thank the friends and family members who came to attend this ceremony today.

Mr. Aubin, Mr. Segal, thank you for your courage and dedication. It is truly a privilege to be here this evening for your decoration with the Legion of Honor as a token of France’s eternal gratitude. We shall now proceed to the official decoration, which will be performed by Capitaine de Vaisseau Rivière, Commander of “the Monge”, the French Navy Ship.