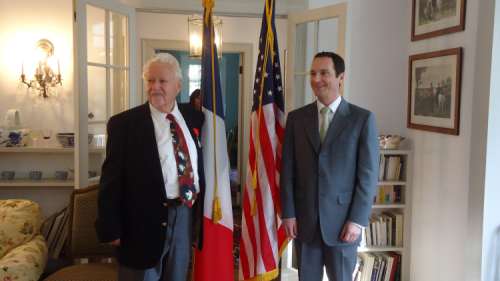 Mr. Sklar was inducted into the United States Navy on January 31, 1944 and was assigned to the USS Hambleton. He would go on to serve for over two years, taking part in the campaigns of Normandy, Northern France and Southern France, and obtaining the rank of Seaman First Class.

Mr. Sklar arrived in France on June 7, 1944, during the landings at Normandy. The USS Hambleton escorted a large convoy of LSTs (Landing Ship, Tank) to the beaches. On June 9, 1944 Mr. Sklar’s ship entered into direct fire with the enemy, sinking an E-boat and damaging five others.

Following the Normandy landings, Mr. Sklar took part in the bombardment of Cherbourg on June 24, 1944 during the campaign of Northern France, when the USS Hambleton created a smokescreen to protect the other boats at the port by hiding their position. Mr. Sklar then went on to participate in the campaign of Southern France starting on August 15, 1944.

In order to honor and remember such incredible sacrifice, France presents the Legion of Honor. Emperor Napoleon Bonaparte established this award in 1802 to recognize exemplary military and civilian services and is the oldest as well as highest honor in France. Mr. Sklar’s service and courage perfectly match the description of this award, and the Consul General, in the name of the President François Hollande, presented it to him in a quiet ceremony.

Today France continues to be grateful to American veterans for their efforts during the decisive campaign of Northern France. Their contributions are exemplary models for all future generations, especially since both French and American troops are still engaged in the fight for freedom in other parts of the world.