Home > Visit of the BEM Monge to Boston!

Visit of the BEM Monge to Boston!

The BEM Monge, a ship which conducts tests and measures as part of the French Navy, recently docked in Boston Harbor. 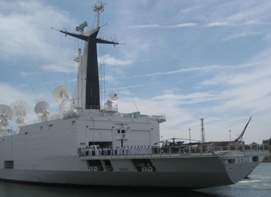 On Monday, June 21st, the Monge hosted a reception to mark the 2010 Journée d’Appel de Préparation à la Défense, an annual day where French youth learn about French defense (in terms of international law and European geopolitics) as well as the different military careers it offers. Most French citizens participate in this one-day instruction course between the ages of 16 and 18 since it is mandatory in order to have full access to many citizen services (such as college entrance exam tests, a drivers’ license, or to apply for any government position). 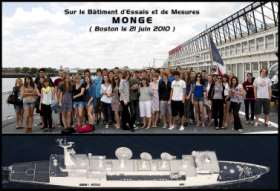 53 French youth were welcomed aboard the Monge earlier in the day by its officers and crew, who spoke with them about the French armed forces and its careers as well as the very specific role of the Monge in the French Navy.

Later that evening, Captain Daniel Faujour, Commander of the BEM, hosted more than two hundred guests at a reception held on the boat’s stern. Four World War II veterans from the Boston area were awarded the medal of la Légion d’Honneur, France’s highest distinction, by Christophe Guilhou, the Consul General of France in Boston, at the reception as well. 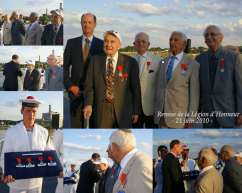 If you want to follow this ceremony filmed by NECN, click here and if you wish to see more pictures of this event, please visit our Facebook page!