April 11, 2013 - Fabien Fieschi, Consul General of France, visited the Naval War College of Newport last week, accompanied by crew members of the BEM Monge, including CV Jacques Rivière, Captain of the Vessel. The visit to the Naval War College was followed by a presentation at Simulia, a French company in Providence, that is part of Dassault Systèmes. The BEM Monge was moored in Boston from April 8th to April 13th.

Visit to the Naval War College, guided by Pr. John B. Hattendorf

The morning of the April 11th, the crew of the BEM Monge was warmly welcomed at the Naval War College, where officers at the school had prepared a short program of activities. After a meeting with Admiral John Christenson, President of the Naval War College, the French delegation visited the museum, a true testimony to the importance of the historical role that French people have played in Rhode Island.

Presentation of a training simulation program.

Following a brief tour of the museum, officers of the War College presented to the French sailors the school’s navigation simulation program, which allows students to virtually practice piloting vessels on the open sea. CV Jacques Rivière was even invited to try, and he found himself (virtually) navigating an American ship!

At the end of the visit, the French delegation joined their American counterparts for a lovely meal, reflecting on the day’s activities and raising a glass to the lasting friendship between their two countries. 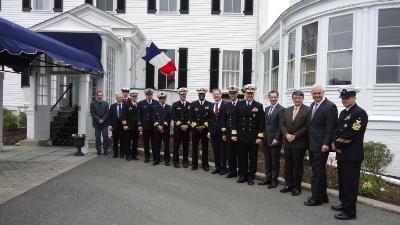 Group photo, including French and American officers, as well as Fabien Fieschi, Consul Général of France, and Roger Begin, Honorary Consul of France in RI.

Find more photos from the visit on our Facebook page.

Meeting with the French employees of Simulia.

That afternoon, the French delegation visited the French company, Simulia, which is part of Dassault Systemes in Providence (RI). There they had the opportunity to meet with the firm’s French employees, including Simulia’s director, Mr. Scott Berkey.

Simulia creates detailed simulation software for clients with diverse objectives, whether they want to test a product before its release or virtually train for a certain activity.

For example, the engineers at Simulia have created a simulation program for crash-testing vehicles, used before companies proceed to a real-life version of the test. Other than helping clients save money, this program helps car companies improve and optimize security in their vehicles, testing safety without having to manufacture a new car for each test and allowing for more detailed data analysis for research and development purposes. 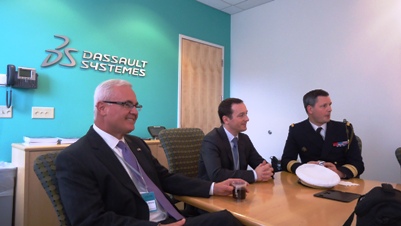 Lastly, this day concluded with a presentation by the Providence Committee on Foreign Relations on Franco-American relations, especially concerning economic cooperation.
The Consul General highlighted the importance of this cooperation, emphasizing the fact that France is one of the top five investors in the United States; Today there are more than 3,000 French companies in America that generate nearly 600,000 jobs.