Home > WIN A PAIR OF TICKETS FOR THE CONCERT OF THE FRENCH MUSICAL COLLECTIVE (...)

Nouvelle Vague creates irresistible bossa nova covers of unruly rock classics, sung by a revolving cast of chanteuses. Touring in support of their newest recording, Nouvelle Vague continues to subvert cult classics by the Clash, Joy Division, the Specials, the Sex Pistols, Depeche Mode and many others into sunny, wistful pieces of exotica. Clare and the Reasons will open the concert. 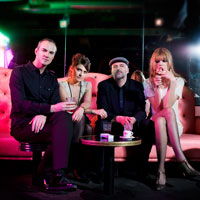 To win one of the two pairs of tickets, just answer the following question:

What is the name of Nouvelle Vague’s latest album, released in June 2009?

Please send your answer, with “Nouvelle Vague” for subject, your name, college affiliation (if applicable) and contact information (e-mail & phone number) before midnight on Wednesday January 20th to culture@consulfrance-boston.org

The winners will be drawn randomly from all eligible entries received during the applicable contest period & the result will be announced on January 21st.