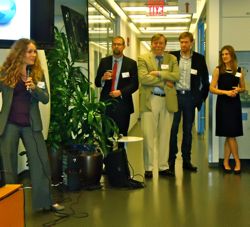 Audrey Guazzone, U.S. Project Manager of YEi, and four of the five laureates.

On October 2nd, 2012, the Young Entrepreneurs Intitiative (YEi) held the annual Awards Ceremony at the Cambridge Innovation Center. A great success, this unique celebration showcased the 2012 laureates, selected last July to enter the Yei Accelerator, as well as YEi’s many partners from Boston and France.


Audrey Guazzone, U.S. Project Manager of YEi, kicked off the ceremony and outlined the exciting new developments of the program. She then introduced Fabien Fieschi, Consul General of France in Boston, who gave the keynote address. The Consul General congratulated the five winners on their success and celebrated the program’s extensive work in encouraging foreign investment in French markets. 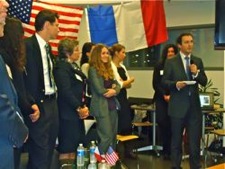 Fabien Fieschi (on the right), Consul General of France, delivers the keynote speech.

Many of the program’s partners and sponsors were on hand to talk about the importance of the program, which provides the laureates with coaches to help them understand entrepreneurship in France, optimize their YEi-funded business trip to certain regions of France, and develop a successful European strategy for their innovative startups.

The ceremony included speeches by several members of the French delegation, including:

Mounia Gicquel, in charge of Innovation & Technology at the Ministry of Foreign and European Affairs

François Ducroux, President of the French-American Chamber of Commerce in New England

Antoine Mynard, Science and Technology Attache at the Consulate General of France in Boston

Following the acknowledgment of this year’s sponsors, such as Marie Landel & Associates, the 2012 YEi Awards were given to representatives of each of the five winning startups, who spoke about their companies and their first impressions of the program.

This year’s laureates are:

These five laureates, after two intensive training sessions in Boston, will benefit from a one-week business trip to France as well as facilitated access to incubation services from the RETIS network. RETIS is a non-profit organization dedicated to promoting innovation players and programs in France. Comprised of more than 100 members, several of whom were represented at the event, RETIS provides advanced training and expertise services.

To read more about the 2012 YEi laureates, please click here.

To learn more about the YEi program and the many benefits of investing in France, please visit the YEi website.

Photos of the five laureates receiving their award from Consul General Fabien Fieschi: 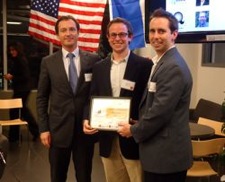 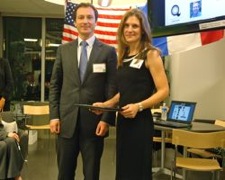 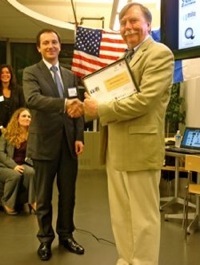 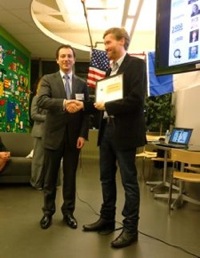 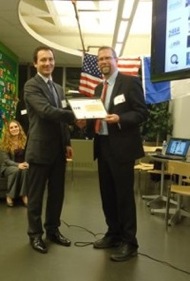 From left to right : Fabien Fieschi, Consul General of France, and Joseph Tesar, President at Quantalux