The 2015 Voyage of the Hermione

The Hermione is a reconstruction of the original 1790 French frigate, a ship most well known for carrying Lafayette back to the United States to help America gain its independence. This historical ship has been recreated based off of drawings of its identical sister ship, and departed from Rochefort, France in September 2014. Finally, after a 27 days trip cross the Atlantic, and a brief pose in Bermuda, the Hermione arrived in the United States. She stopped 12 times in total, sailing up the coast until Nova Scotia, and then returning home to France. The stops that she were made along the Eastern Coast of the United States all have significant historical value for the French- American relationship. 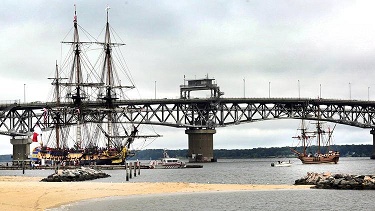 The Hermione docked in Yorktown, VA for two days. She was greeted with a fanfare of fireworks and cheers, from both French and Americans. During this stop, over a thousand visitors came to get a closer glimpse at the magnificent ship, some even had a chance to board her and get a peak on deck. The three day stop was filled with festivities commemorating the continuous Franco-American relationship. 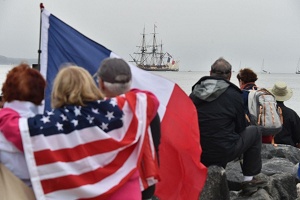 Yorktown, VA is the site of the famous Siege of Yorktown, It was here, over 200 years ago that the last land battle of the American Revolution was fought. The colonial military, led by Washington and the French, led by the Comte de Rochambeau, seized Yorktown, leading to the surrendering of the British.

Mount Vernon June 9, 2015. Distance traveled: 5,722 nautical miles The Hermione took a short rest in Mount Vernon, an area that is not new to the history of the Franco-American relationship. 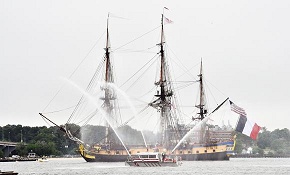 This little town on the Chesapeake Bay, is the home of the key to the now-destroyed prison that once held political prisoners in Paris, the infamous Bastille.

This key was given to George Washington from his ’adopted son’ Marquis de Lafayette in 1790. This gift, given on behalf of the people of France, was seen as a symbol of the victory by Liberty over Despotism. A letter to Washington accompanied the key and in this letter Lafayette wrote the following : “Give me leave, My dear General, to present you with a picture of the Bastille just as it looked a few days after I had ordered its demolition, with the main key of that fortress of despotism—it is a tribute which I owe as a son to my adoptive father, as an aid de Camp to My General, as a Missionary of liberty to its patriarch.” (Founders Online, National Archives)

Alexandria June 10-12, 2015 Distance traveled: 5,728 nautical miles Alexandria, a town on the waters of the Potomac River, just a stones throw away from Washington, D.C, was visited by the Hermione. 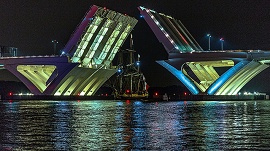 The Woodrow Wilson bridge opened, a rare occurrence, for the tall sails of the ship. Both Alexandria and the capital hosted an array of events celebrating the arrival of the frigate, and the Franco-American friendship. In D.C, at, most fittingly, Lafayette Park, there was a wreath ceremony attended by numerous historical associations, descendants of Layette and Rochambeau, and the Alliance Francaise de Washington D.C, among others. (pictured below)

Lafayette himself visited Alexandria in 1824 as "Our Nation’s Guest", even attending a ball at Gadsby’s Tavern, which is still standing today! Lafayette was loved by Americans, a celebrated figure, and many commemorative plates and portraits depicting the marquis were treasured, some of which can even still be seen currently on display at the Alexandria Archeology Museum. 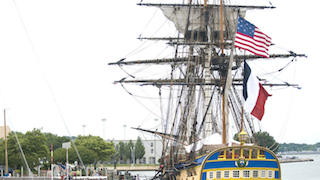 Annapolis, a historical shipping town and home of the United States Naval Academy, presented various events celebrating and commemorating the Franco-American relationship. On the 16th, a parade was held marching from downtown, until reaching the Fallen French Soldiers Monument, where buried are french soldiers who lost their lives fighting for American indepence. Written on the monument: “a tribute of gratitude to the soldiers and sailors of France buried here, who gave their lives in the struggle of American Independence. The memory of their deeds will be remembered forever. 1781-1783 “ 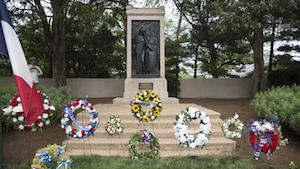 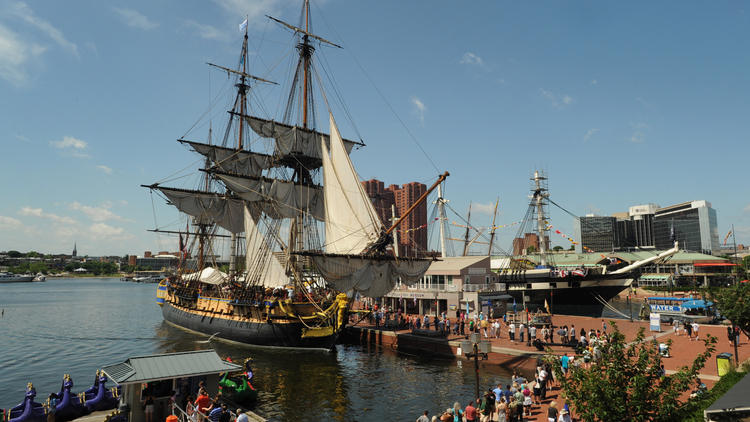 L’Hermione arrived in the early morning into Baltimore’s beautiful Inner Harbor on June 19th. She was greeted by The Pride of Baltimore II, the city’s own historic ship reconstruction group and exchanged welcoming gun blasts to kick off L’Hermione’s stay in Charm City. Lafayette’s presence in Baltimore certainly had a lasting effect with the creation of Lafayette Square, Fayette Street, and Lafayette Avenue, all named after the Military Leader. Even a statue of Lafayette on horseback is on display at Mount Vernon Place.

A joyous welcome ceremony followed L’Hermione’s arrival on Friday, attended by officials from the French Naval Attache and U.S. Navy, U.S. Senator Ben Cardin (D-Md.) and the deputy mayor, among others. By Friday afternoon, the line to tour the ship wrapped around the entire area as Baltimoreans waited to explore this historic ship.

Although Maryland was one of two states that did not see any action during the American revolution, the other being New Hampshire, it was in Annapolis that Lafayette watched carefully, and waited on the instructions from Washington on their next move. Much of the supplies for the American and French troops were stored in Annapolis as well. At the time of the American revolution, Annapolis was the most cosmopolitan of all cities in America, and French style and culture was highly valued. Those living in Annapolis at the time that French troops were stationed there were more than happy to accompany the young soldiers. 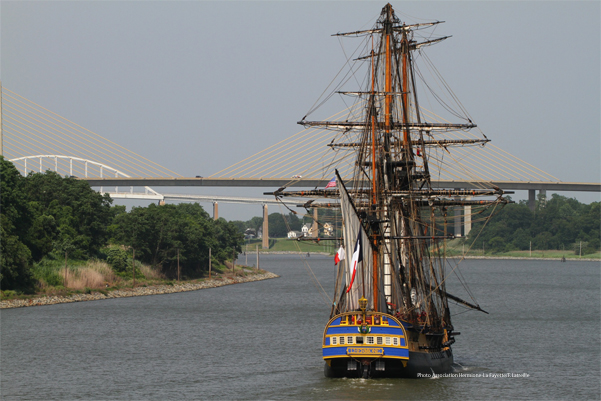 On June 25th, L’Hermoine docked in Philadelphia, a city in Pennsylvania situated on the Delaware River. When the ship first sailed up the Delaware River in 1781, it took 8 days but today it only took a few hours to reach Penn’s Landing! L’Hermoine joined more than a dozen American ships as part of the Philadelphia Tall Ships Festival for a weekend of celebrations and revolutionary reenactments. The festival also included fireworks and a performance by the United States Army Band.

Lafayette was frequently in Philadelphia in 1777 and 1778 as well as in 1780 and 1781 to meet with Congress during the Revolutionary War. It is the city where he volunteered to fight with the American army as well as where he first met General George Washington. Philadelphia is also the site where members of the United States Congress were received aboard the ship in 1781. 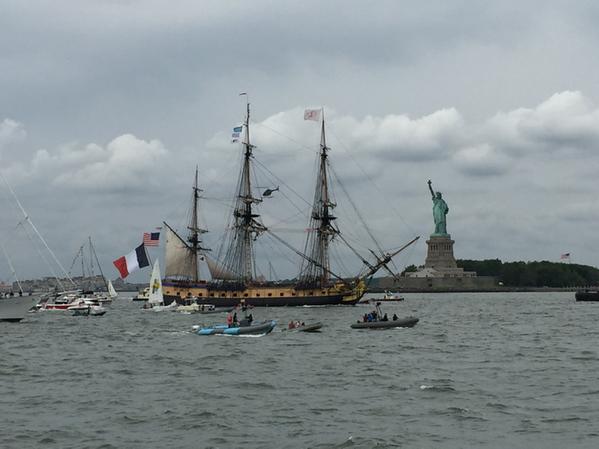 L’Hermione arrived in New York City on July 1st to celebrate the 4th of July weekend in the largest city in the United States. New York was the nation’s capital from 1785 to 1790 and was the last city to be liberated by George Washington’s army at the end of the Revolutionary War. The weekend was filled with public tours of the ship, performances at Federal Hall, a flag raising ceremony, and a public screening of Jacques Demy’s Les Demoiselles de Rochefort. On July 4th, as part of the celebrations, there was also a Parade of Ships, led by Hermione, which sailed past the Statue of Liberty. 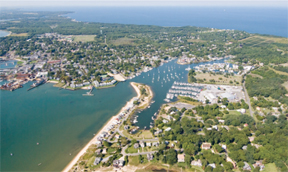 On July 6th, Hermione docked in the Greenport Marina as part of the Tall Ships America Festival. Hermione joined five other ships from around the world, including the Picton Castle (Nova Scotia) and Sagres (Portugal). Greenport, which is known for its vineyards and long maritime history, is located on the North Fork of Long Island and has become an important rendezvous spot for the Tall Ships America Festival. As part of the celebrations, there were tours of the ship as well as a photographic panel display of Lafayette’s role in the American Revolution as well as of the Hermione’s reconstruction.

Newport, RI July 8-9, 2015 Distance Traveled: 6,054 The gates of Fort Adams opened to welcome visitors enjoying the festivities, and the beautiful view of the Hermione. Military reenactments were enjoyed, and if one was lucky- they got to dine with George Washington! 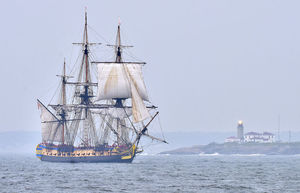 Newport played a special role in the American Revolution. It was here that the American and French troops first cooperated in the fight for independence. Maybe because it was their first time working together, or because of the massive storm that destroyed ships and supplies, but during the Battle of Rhode Island, the French and Americans did not succeed in stopping the British, and had some communication problems. We know now that this small mishap was just a bump in the road, after all, the United States became an independent country, and the Franco-American friendship is still going strong today!

The Hermione arrived at Rowe’s Wharf in Boston’s downtown financial and harbor district to spend the weekend in the birthplace of the American Revolution. The revolution was triggered by the Boston Tea Party, which occurred in the same harbor where the Hermione docked for the weekend. However, this was not the first time that Hermione was in Boston, Lafayette first visited the city on April 28, 1780! 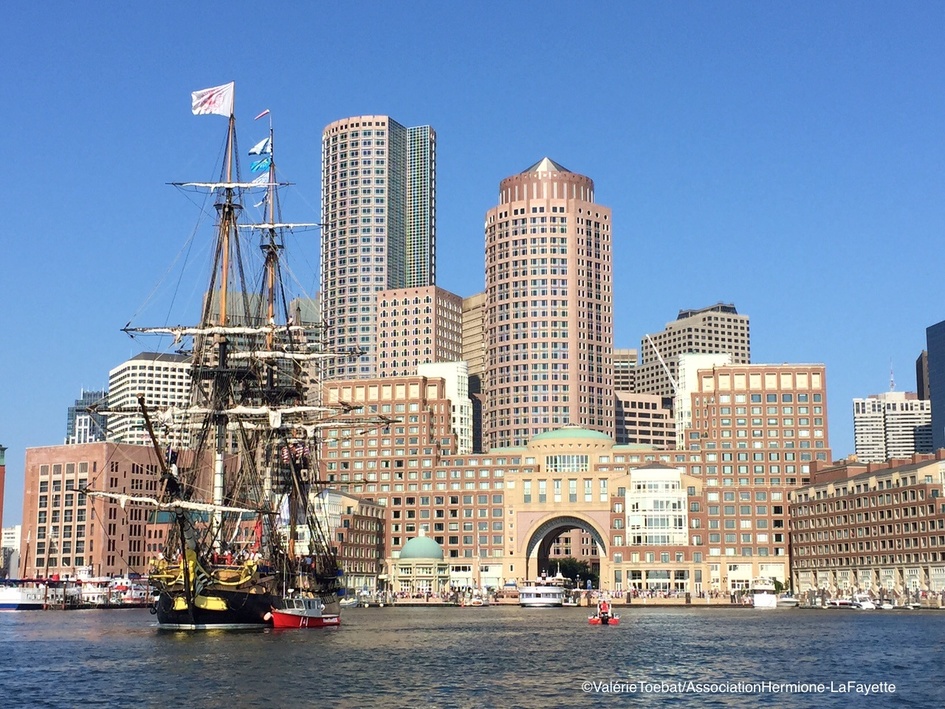 The weekend kicked off with a parade from Faneuil Hall to Rowe’s Wharf and the pealing of the bells, which recreated those which greeted Lafayette and the Hermione in 1780. There were also public tours of the ship and a film screening of Jacques Demy’s Les Demoiselles de Rochefort at the Museum of Fine Arts. 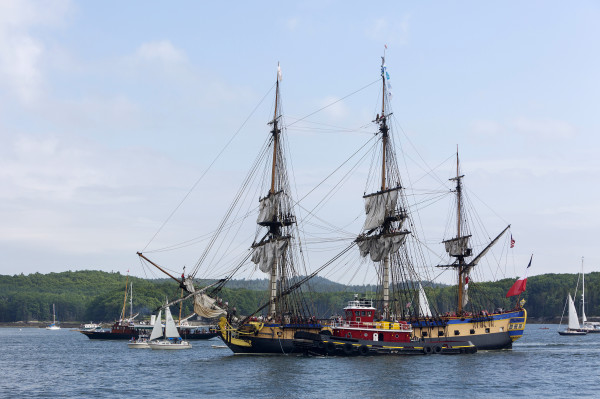 Castine is one of the oldest communities in North America. It was founded by the French in 1613, and later served as the capital of Acadia. This ancient French colony serves to demonstrate the influence of France that still exists today in the United States. This impact was quite evident during the Hermione’s visit to Castine. Arriving just in time for Bastille Day, the Hermione was greeted with a welcome ceremony, and a parade throughout town. Various festivities continued throughout the day, including storytelling of traditional Acadian tales, and live Acadian music! And of course, the Hermione was open for visitors. 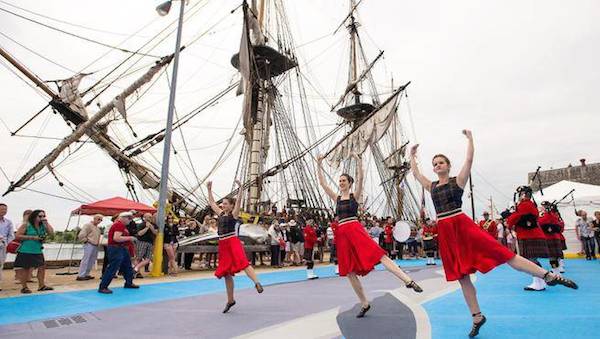 July 18, 2015 Distance Traveled: 6,457 Nautical Miles On the final leg of her North American tour, the Hermione docked in Lunenburg, Nova Scotia. This is the only stop that the Hermione will take in Canada. The Hermione was escorted into port by Bluenose II, a fishing schooner, and the Lunenburg Fire Boat. Lunenburg was settled by the French in the 17th century, before being colonized by the British. Lunenburg has been a prominent port since this time, and has been active in the shipbuilding industry.

St Pierre et Miquelon are tiny islands near the coast of Newfoundland, Canada, the only remnents of the French colonies in North America. The Hermione was a day late to dock in Saint-Pierre et Miquelon because of the strong winds making it impossible to reach the islands. When she finally could arrive, the Hermione docked for two days on these islands, just in time for the bicentenial celebration celebrating 200 years since these areas became officially French. 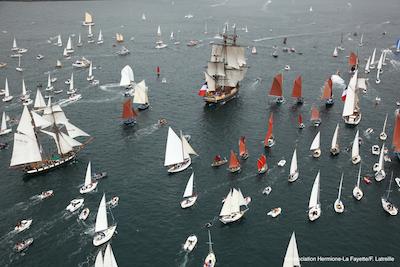 This city, along the most North Western tip of France, is known as the naval capital of France. It was only fitting that Brest opened its arms and welcomed the return of the Hermione. During the Hermione’s visit in France, more than 12,500 visitors boarded the ship, and there was almost 172,000 visitors in Brest. The Hermione’s visit was obviosuly a huge success. Maybe the most notable visitor was this dolphin, who is known to the Breton locals as the dolphin that never leaves the Brest Harbor. 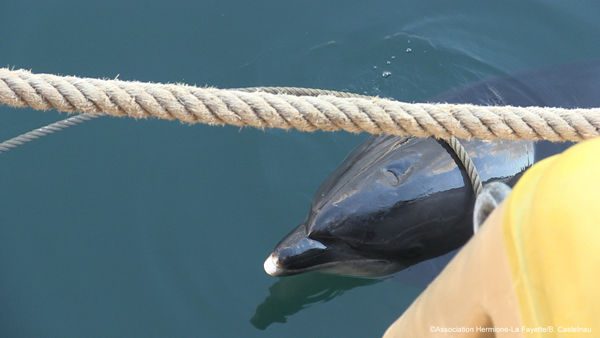 Detailed programs for each city can be found at: http://hermione2015.com/voyage2015/