The French Consulate in Boston Excellence Award is awarded annually to a student who went to France for a student exchange and promoted actively their experience once back in their home university campus and encouraged their classmates to go and study in a French university during their studies. 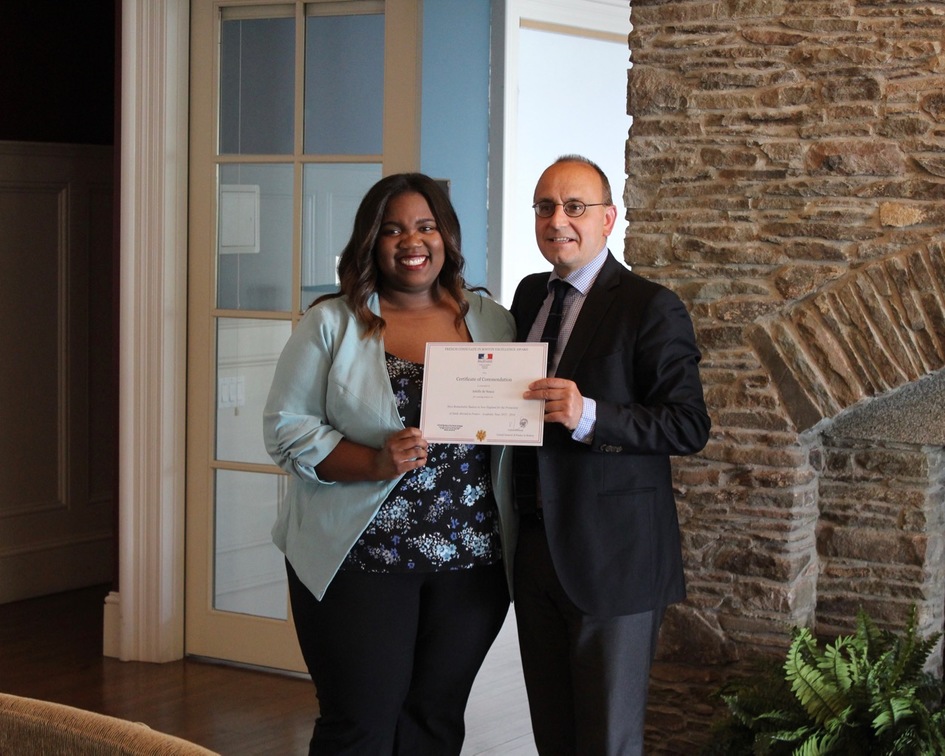 With the excitement of university commencement in the air, we are pleased to congratulate Arielle De Souza, recent graduate of the University of Rhode Island, as the proud winner of the 2016 Excellence Award of the Consulate General of France in Boston for being an outstanding and remarkable student in the promotion of her experience as an international student in France. This prize was awarded to her by the Consul General of France at a ceremony at the Alumni Center of the University of Rhode Island on May 19.

The prize was created in 2014 to recognize a student who went to France for a student exchange and promoted actively their experience once back in their home university campus and encouraged their classmates to go and study in a French university during their studies. This competition is open to all colleges in the district of the French Consulate of Boston.

Arielle is a 23-year-old Brooklyn, N.Y. native who began her French studies at the University of Rhode Island as a freshman having taken Spanish throughout her high school career. Since her induction into the International Engineering Program — a novel program designed for URI students interesting in coupling their rigorous engineering studies with foreign language study — Arielle has been passionate in promoting the French language and culture on the URI campus. She acts as an ambassador for the program and at URI’s International Center, is a tour guide, and is a member of several honors engineering societies, among other honors and achievements. She was also recently recognized by The Root as one of 25 young "futurists" to keep an eye on. Arielle has intentions to return to France soon to pursue a master’s degree in offshore energy — there’s little doubt that she’s going to make waves on the French seaboard this fall.

Read more about Arielle here and watch an interview with Arielle below: