On April 23rd, 2018 at 11:30AM, Minister Jean-Michel Blanquer will give a conference on “President Macron’s Education Policy” at the John F. Kennedy School of Government at Harvard University. 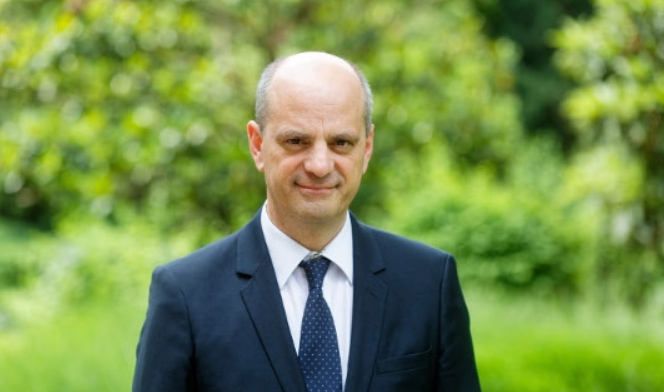 A conference by French Minister of Education, Mr. Jean-Michel Blanquer, on “President Macron’s Education Policy” at the John F. Kennedy School of Government at Harvard University.

Minister Jean-Michel Blanquer will be introduced by the Dean of the Harvard Kennedy School, Douglas Elmendorf. The conference on President Macron’s Education Policy will be moderated by Professor Julie Battilana.

The event is hosted by the European Club, a student organization, and the Social Innovation and Change Initiative, at Harvard Kennedy School.

This event is open to the Harvard community and to the public. Seating is limited and available on a first-come, first-served basis.

More information about the speakers:

Jean-Michel Blanquer was appointed as Minister for National Education on 17 May 2017. Born in Paris, he obtained a doctor in law from Panthéon-Assas University and a Master’s in politics from Sciences Po Paris. From 1996 to 1998, he was a professor in civil law at Sciences Po Lille. From 1998 to 2004, he was Director of the Institute of Latin American Studies at the New Sorbonne University. From 2009 to 2012, Jean-Michel Blanquer served as the Director general of secondary and junior school education under then Minister for Education Luc Chatel. In 2013 he became President of the prestigious ESSEC Business School in Paris, France. More about Minister Jean-Michel Blanquer: http://www.gouvernement.fr/ministre...

Douglas W. Elmendorf is an American economist who is currently the Dean and Don K. Price Professor of Public Policy at Harvard Kennedy School. He previously served as the Director of the Congressional Budget Office from 2009 to 2015. More about Douglas W. Elmendorf: https://www.hks.harvard.edu/faculty...

Julie Battilana is the Joseph C. Wilson Professor of Business Administration in the Organizational Behavior unit at Harvard Business School and the Alan L. Gleitsman Professor of Social Innovation at Harvard Kennedy School, where she is also the founder and academic co-director of the Social Innovation and Change Initiative. More about Julie Battilana: https://www.hks.harvard.edu/faculty...